The ODUNDE Festival, held in South Philadelphia each year on the second Sunday in June, celebrates the history and heritage of African people around the globe and serves to instill and encourage cultural pride. Taking its name from the word meaning “Happy New Year” in the Yoruba language (placed in all capital letters by the festival founders for emphasis), the event celebrates the coming of another year for Africans in America and throughout the diaspora. From its origins in 1975, the festival became one of the largest and longest-running African American street festivals in the United States. 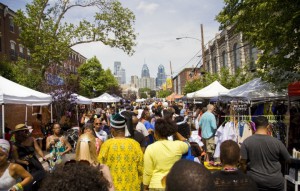 Vendors draw crowds of shoppers during the ODUNDE festival, which begins with a procession from Twenty-Third and South Streets to the Schuylkill River. (Visit Philadelphia)

The festival grew from an idea conceived by South Philadelphia resident Lois Fernandez (b. 1936) with the help of her friend Ruth Arthur (b. 1933) after a trip to Nigeria, West Africa, in 1972. Her concept drew from African cultural heritage, specifically the Oshun Festival of the Yoruba people in Nigeria. The first event (originally called the Oshun Festival) in 1975 was made possible by a $100 grant from Philadelphia’s Southwest Center City Community Council and the support of Fernandez’s neighbors. In 1976, Councilman John Anderson (1942-83) awarded a $5,000 grant. After two years, propelled by the cultural movement sweeping the nation in the wake of the civil rights struggle, the festival grew explosively and began to draw people from around the region. “Our neighborhood needed something,” Fernandez said. “We didn’t have anything to connect to. The whites have the Mummers, Now we have ODUNDE.”

While the black community embraced the festival, increasing gentrification in South Philadelphia led to opposition by some new occupants of the neighborhood. In 1984 a group of residents collected signatures and petitioned City Hall to remove the festival, stating that it had grown too large for the neighborhood. The city offered Fernandez a subsidy to move the event to Penn’s Landing, but because of the racial undertones of the complaints and the tradition of using the South Street Bridge to present offerings to Oshun, she refused. Over the years other residents and neighborhood groups also tried suing to stop the event, but with the support of the black community, Fernandez succeeded in keeping the festival in its original South Street location and responded to the opposition by expanding. 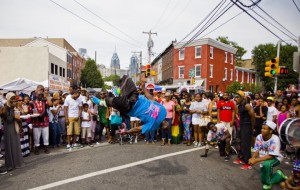 By 2015, the festival had grown to attract many thousands of celebrants and and more than one hundred vendors over the space of twelve city blocks. Sponsored and hosted by ODUNDE Inc., a South Philadelphia-based cultural organization established in 1983 to provide cultural enrichment for African American people, the festival sustained a communal, familial, and spiritual atmosphere through the efforts of several hundred volunteers and a board of directors, Fernandez (the organization’s president), and her daughter, Oshunbumi Fernandez (executive director). One veteran attendee, Junious Stanton, wrote in 2003 that “being at Odunde is like a mystical baptism. The festival there immerses you in a vibratory sea of blackness. You get dipped into a positive spirit of being African and come up revived, energized, and feeling good.”

The festival evolved to include a variety of pre-festival events, including networking opportunities, cultural and historical panels, zumba classes, library and museum exhibits, an African business roundtable, an African diplomatic ambassador reception. The festival officially begins with a procession from Twenty-Third and South Streets to the Schuylkill River to honor the Yoruba orisha (deity) Oshun, the goddess of the river, who is associated with love, beauty, femininity and fertility. Participants usually wear white clothing or traditional African attire and make their pilgrimage to pour libations, offer prayers and incantations, and give offerings of honey, fruit, flowers, or money while accompanied by drumming and dancing. 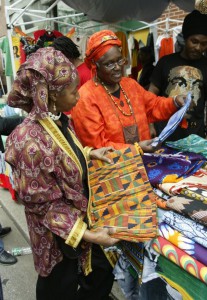 Vendors offering wares from all over the world gather in South Philadelphia to create a vibrant African marketplace. (Visit Philadelphia)

The procession then makes its way back from the river to the festival area, a vibrant re-creation of an African marketplace. In the streets packed with participants, vendors from all over the African diaspora sell African and Caribbean food, crafts, clothing, art, and jewelry. Performances on two main stages—one on South Street and one on Grays Ferry Avenue—feature entertainment ranging from rap and hip hop to fashion shows to tap dancing to African drumming and traditional dances. Impromptu street performances occur on nearby street corners.

In 2011, Oshunbumi Fernandez (b. 1974) created ODUNDE 365 to build a cultural movement beyond the festival. This organization promotes the principles of the festival year-round through African drumming and dancing classes for children, African arts courses, a self-esteem program for young girls called “I AM BUMI” (Beautiful, Unique, Magnificent, Individual), and a program called “My Story,” which promotes success through local, influential professionals sharing their stories with young people. In 2013 the organization collaborated with Philadelphia music legend Kenneth Gamble (b. 1943) to create Kwanzaabration, an event to educate children and adults about Kwanzaa and the holiday’s seven principles.

Although it started from humble beginnings, ODUNDE evolved into a prominent community staple and celebration of the cultural heritage of African people around the globe. Seeking to instill and encourage cultural pride throughout the year, the festival has demonstrated the impact that committed individuals may have on their local, national, and international communities.

Christina Afia Harris is a Ph.D. candidate in the Department of Africology and Africana Studies at Temple University. This essay is derived from her research and her experience as an ODUNDE participant.